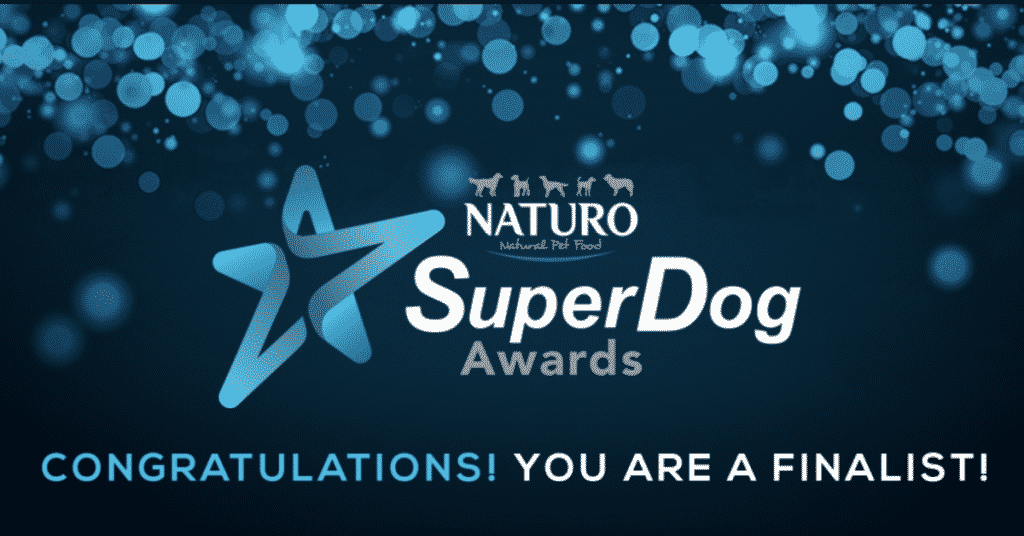 You have voted in your droves and the results are in! We are delighted to announce the finalists for the 2021 Naturo SuperDog Awards who are invited to the award ceremony on the night of the 9th of November.

We must first impress just how special each and every nomination has been. Reading your stories has been moving, emotional, humbling and inspirational in equal measure. We always knew dogs were amazing, but these awards have solidified their place as the most special souls living alongside us in our daily lives.

Lucy – Lucy suffered terribly at the hands of her greedy and callous owners who put profit before compassion in their quest to benefit from selling Lucy’s precious puppies.  Rescued from a puppy farm she became the shining light, building awareness for this vile industry and making real change in the form of Lucy’s Law which has no doubt saved millions of dogs from a similar fate.
Show your support for Lucy

Floss – Working for SARDA (Search & Rescue Dog Association) Floss is an exceptional dog who has completed many many hours of training to go on and rescue a vulnerable lady who had been missing for 4 days.  She put her nose to the test and managed to rescue this lady and many more from certain death.
Show your support for Floss.

Max – Kerry, Max’s owner, was sinking lower and lower into depression and needed something to bring joy back into his life. Max came along and did just that, not only bettering Kerry’s life, but also thousands of people’s lives throughout lockdown who looked forward to seeing Max’s adventures on Facebook when they were stuck at home. Show you support for Max Out in the Lake District

Rico – a cheeky little rescue dog from Portugal. His natural instinct to save and protect led him to use his nose to find a family’s beloved dog who had been lost out on a walk.  With only a couple of weeks’ training under his belt, he pushed through and reunited the family with their special pup.
Show your support for Rico

Henry the Hedgehog Dog – a special dog working his little heart out protecting our nation’s wildlife via the Conservation K9 Consultancy.  He dedicates many hours a day to help conserve our endangered prickly little friends. Show your support for Henry

Hope – gorgeous Hope has spent her days as a Brainydog bringing joy to people suffering from neurological conditions.  She brought happiness to prisoners, children struggling in mainstream education and those living with mental health issues.
Show your support for Hope

Pippa Pipsqueak & Trooper – a pair of truly inspirational paraplegic pups who enjoy life to the full. The are dedicated to spreading the word that disability doesn’t have to mean end-of-life.
Show your support for PippaPipsqueak & Trooper

Fabulous Finn – some of you may know the heroic story of the loyal german shepherd who threw himself in the path a youth wielding a knife to protect his handler. His selfless devotion led him to suffer huge wounds to his stomach and head. His story changed history when he and his owner PV Dave Wardell led the campaign to change laws to prosecute criminals for injury to animals as well as humans.
Show your support for Finn

Jordan Shelley – one of the directors of the FOAL (Focus on Animal Law) Group and indomitable animal rights activist Jordan Shelley has dedicated himself to stopping the barbaric practices of ear cropping which has now been made illegal in this country.  His campaign continues to ensure no loopholes allow puppies to be imported who have had the practice carried out abroad.
Show your support for Jordan Shelley

Plum Pudding – A survivor from a tough start in life, lovely little Plum Pudding survived against all the odds, following her big sister Lucy’s footsteps campaigning to make dogs’ lives better.  Requiring further surgery and a 12-month recovery has only added to her resilience and allowed her warm heart to shine through.
Show your support for PippaPipsqueak & Trooper

Mila Moo – From certain death and a huge gaping wound in her beautiful head 5 years ago to taking her place on the 2019 Crufts carpet, Mila Moo has shown her courage and tenacity in spades. She also supported her owner through a cancer scare, a diabetes diagnosis and continues bringing joy and boundless fun to all those around her. Show your support for Mila Moo

Bella – The tragic tale of Bella is heartbreaking and sickening in equal measure. Tied to a boulder and thrown into the River Trent, left for dead, what humans can do to animals continues to shock and disgust.  After finding the culprit who was thankfully prosecuted beautiful Bella found her forever home.
Show your support for Bella

Bert Snuggs – Bert spends his time with his devoted owner a retired police officer who was paired with him after suffering from severe PTSD and having suicidal thoughts. He himself was a rescue dog rescued by Dogs Trust. The two of them found each other and have the most special bond allowing them to both live life to the full.
Show your support for Bert Snuggs

Ruby & Rowley – these two amazing dogs have turned their owners’ life around. After collapsing at 15 years old and suffering a life-limiting brain injury Megan developed seizures and tunnel vision. Not wanting to have to rely on others she trained her dog Ruby to become an assistance dog thanks to AID (Assistance in Disability). Ruby had to retire after a traumatic dog attack and Rowley then stepped in to provide the much-needed support including warning Megan of over 3,000 oncoming fainting episodes allowing her to find safety and alert a friend before it happens. Amazing!
Show your support for Ruby & Rowley

Scooter – this blue-haired surf-dude is a true legend in his area. A rescue himself, surviving being thrown out on the streets in Portugal he went on to train as a Pets As Therapy dog. Using his empathy and warmth Scooter visits hospitals, police stations and care homes.  He also helps his owner who has been diagnosed with complex PTSD and even has his own Surf school too spreading the word about Surf therapy!
Show your support for Scooter

Mae – starting life on a farm where she was chained in a barn as she didn’t want to work sheep, little Mae could have given up or decided humans were not for her. However, once rescued, Mae set about changing people’s lives for the better. She became a registered therapy dog and brought a spark back into the life of her owners’ mum who was suffering from debilitating dementia. A truly special soul.
Show your support for Mae

Cassie – Cassie’s owner has been through more than her fair share of heartache. Losing her beloved father to cancer, being disabled herself, then losing her brother to cancer and subsequently being diagnosed with cancer herself, she sees Cassie as her beacon of life through incredibly dark times.
Show your support for Cassie

Scout – this beautiful blind lurcher was abandoned and left to die on the streets of County Durham.  After thankfully being rescued Scout posed unique challenges to his new owner due to his blindness. However, never one to give up, Scout gave his owner a whole new lease of life by helping her overcome a fear of going out. Going on to become a therapy dog, Scout now brings immeasurable joy to hundreds in his community, raises money by climbing mountains and paddling in the sea and is even a mascot for a local Carers Cafe.
Show your support for Scout

Broken Biscuits – a fabulous team of volunteers and dogs working tirelessly to change the belief that disability means death for dogs. A charity dedicated to helping disabled dogs to live full and happy lives through their ‘borrow a bike’ initiative for paralysed dogs and helping those with injuries and disabilities.
Show you support for Broken Biscuits Disabled Dog Charity

Team Nowzad and Pen Farthing – Founded in 2007, former Royal Marine, Pen Farthing has been rescuing and helping strays in the Kabul area of Afghanistan and reuniting thousands of dogs with the military personnel they lost. More recently Pen captured the hearts of the nation with his bid to evacuate up to 200 dogs and cats from Afghanistan as well as his entire team and their families. Whilst not plain sailing, Pen managed to save his team and countless animals and negotiated treacherous conditions at Kabul airport in the process.
Show your support for Team Nowzad and Pen Farthing

We don’t envy our wonderful panel of celebrity judges having to choose one winner for each category and we hope they have a packet of kleenex with them when they read the stories!

Winners of this year’s Naturo SuperDog Awards will be presented at a gala event hosted by Stacey Dooley on the evening of the 9th of November.

I am so sorry that Mako has gone to Rainbow Bridge. You are absolutely correct. It doesn’t really matter who wins as they are all so special and just being with us makes us the winner. Sending you so much love and hope that those special memories can comfort you at the times when you are missing her so much. All our love, Helen & Mae xx