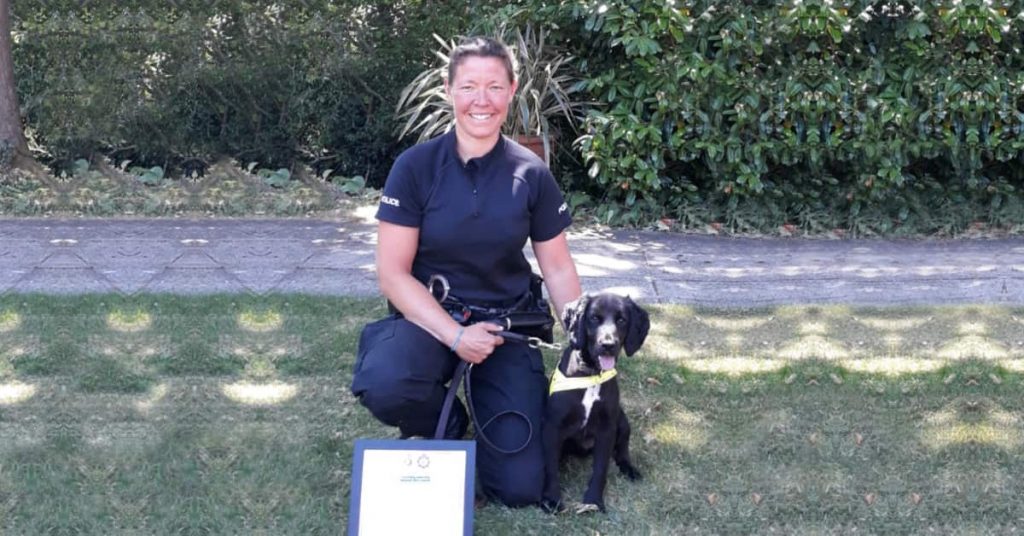 Badger’s SuperDog Survivor Story begins with a malnourished puppy who was dumped in a bucket and suffering from mange, chronic ear infections and eye infections. Now he is nominated for a Naturo SuperDog Award for having survived against all the odds to become a police sniffer dog.

Badger was one of four six-week-old cocker spaniel pups rescued by the RSPCA after being found dumped in a bucket in Surrey in July 2019. The puppies were almost completely bald due to severe mange and were suffering from a number of health problems. They needed specialist care before they were all snapped up by new families. Sadly, Badger – who was incredibly active and intelligent – struggled to settle into his new home and was returned to the RSPCA centre where staff nominated him for the police dog training programme.

In summer 2020, a year after his rescue, Badger qualified as a sniffer dog and was partnered with PC Steph Barrett with Surrey and Sussex Police Dog Unit. He’s trained to sniff out drugs, cash and weapons to help gather evidence in police investigations and bring criminals to justice.

PC Barrett said: “I was saddened to hear how Badger had been dumped on the side of the road but, thanks to the RSPCA, he’s been given a second chance. After a lot of love and training, he has regained trust in humans and become a real success story. He’s still very mischievous at times, but that’s all part of the challenge! He’s a joy to work with. He’s hard not to love. He’s still got that cheeky side to him but he’s obsessed with work and he makes me smile all day.”

Do you know a SuperDog like Badger? Now is the time to tell your story.
Nominate now

Thanks to the RSPCA for sharing Badger’s rescue story