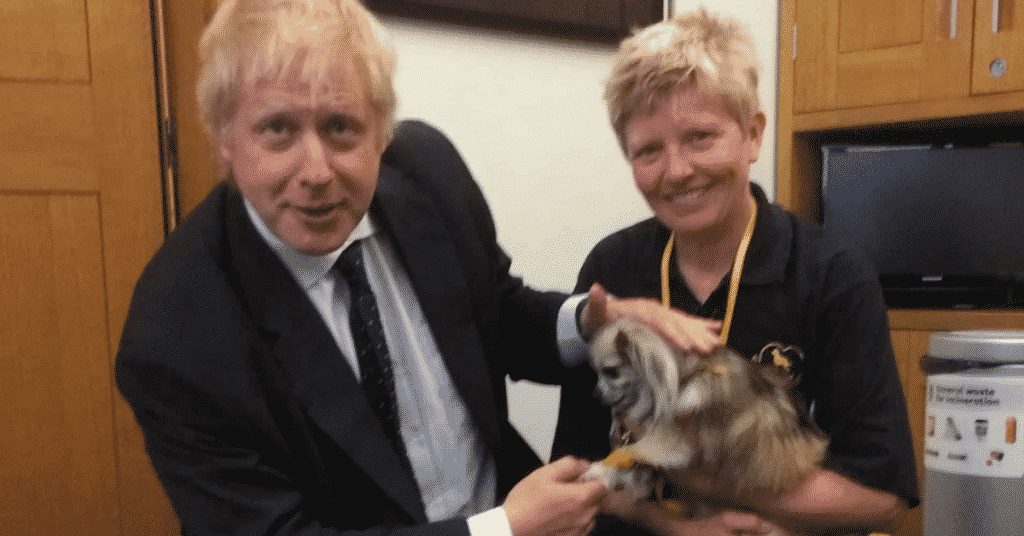 Parliament hosted a particularly pawsome group of visitors last year when professional therapist, Harry Potter, and his furry friends were invited to provide stress relief in the workplace.  The 5-year-old long-haired chihuahua was the leader of the pack when it came to showing off his powerful therapeutic abilities, calming those around him and removing unwanted anxiety from the environment.

Harry Potter, who has been nominated for a Naturo Superdog Award, an awards ceremony created to honour our exceptional four-legged friends, was in high demand.  After lots of strokes and cuddles with Matt Hancock, Secretary of State for Health of the UK, Harry Potter moved on to the top dog himself Boris Johnson.

Jane Neary, Harry Potter’s loving owner, remembers how she shared stories with the then Secretary of State for Foreign Affairs about her beloved pup’s many jobs. Harry regularly helps those in need by visiting hospitals, care homes, schools, the Police and offices in the community. He has also raised over £1,800 for charity Therapy Dogs Nationwide by climbing Mount Snowdon. Jane recalls “we spent about 15 minutes with Boris in his office and he was very impressed with the work we do”.

This wasn’t the first time a dog had captured Boris’s heart. His own dog, Dilyn, now residing at 10 Downing Street, is a rescue from animal charity Friends of Animals Wales. Boris was introduced to the charity by campaigner Marc Abraham, a fellow nominee of the Naturo Superdog Awards. Marc is a dedicated animal rights campaigner who worked tirelessly to pass Lucy’s Law. It prohibits the sale of puppies from pet shops and requires puppies by law to be seen with their mother which prevents the despicable puppy farming industry from profiteering.

Nominations for the Naturo Superdog Awards already show a significant number of entries heralding their dogs as heroes, having provided invaluable support throughout lockdown and contributing to improved mental health and wellbeing for their owners.  According to NHS England and NHS Improvement, mental health problems represent the biggest single cause of disability in the UK, with one in four adults experiencing at least one diagnosable mental health condition in any given year.  “

“The simple act of interacting with a dog has been found to dramatically improve mood and general well being. Beautiful examples of this can be seen time and time again within the nominations and we love that our awards are shining a light on each and every one of them.” Nicole Cooper, Managing Director of events company Touchpoint Live Media comments.

As a nation of dog lovers, we realise all dogs are Superdogs, but charities including Therapy Dogs Nationwide and Pets As Therapy are showing us that dogs may be much more than a cuddly companion tracking mud through the living room. They could actually be the key to unlocking this country’s growing mental health pandemic which currently shows no sign of going away.

You can nominate your own dog, a dog you know or a person working with dogs to improve the lives of humans or our furry friends by visiting the Naturo SuperDog Awards website.