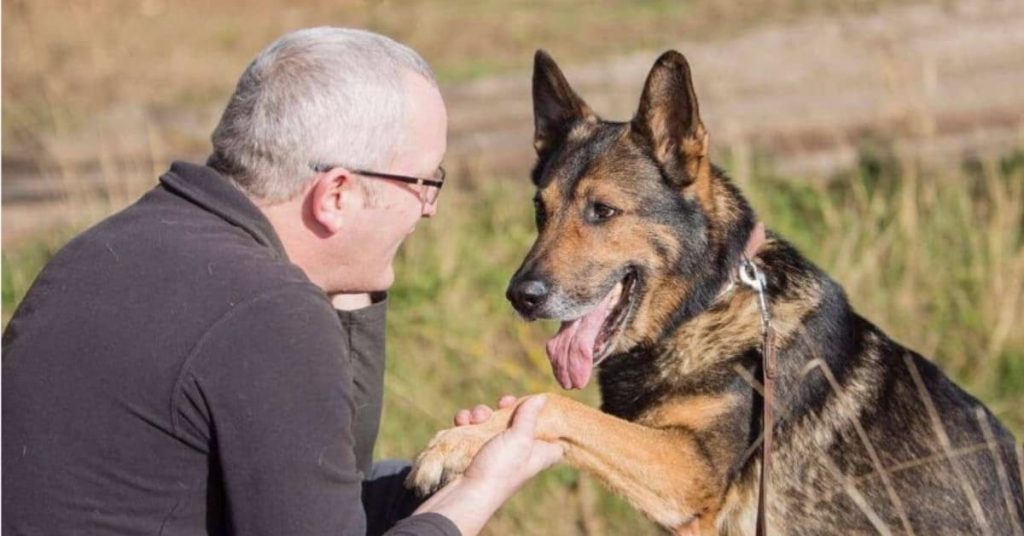 On 5 October 2016, PC Dave Wardell and his police dog Finn were called to an incident in Stevenage where there was a search for a male suspect, believed to be armed.

PC Wardell and Finn located the suspect who ran off. After a shouted warning, PC Wardell released Finn and the dog seized the suspect’s leg as he was attempting to escape over a fence.

As he fell, the suspect viciously stabbed Finn in the chest with a 10 inch hunting knife, before making a second attack directed at PC Dave Wardell. Finn bravely dived in front of his handler and dad to save his life.

Finn suffered another wound to his head and was left bleeding profusely.

Despite this, Finn retained his grip on the suspect, enabling PC Wardell to disarm him. When other officers arrived, Finn was taken to a vet immediately where he underwent emergency surgery in which part of his lung was removed.

Finn recovered from the attack and returned to duty just eleven weeks later. In May 2017 at Stevenage Youth Court, a 16 year-old boy from Lewisham in south London was convicted of assault occasioning actual bodily harm for the attack on PC Wardell, but shockingly, could only be convicted of criminal damage for stabbing the dog.

The attacker was sentenced to eight months’ detention in a Young Offender Institution.

Since the attack, Finn retired shortly before his eighth birthday in March 2017. Since then, Dave & Finn have campaigned tirelessly to change the law to protect dogs as loyal public servants.

Finn’s case highlighted the limited legal sanctions available against those who injure animals being used by the emergency services. Dave created an online petition for “Finn’s Law” which attracted more than 127,000 signatures, to make sure crimes like the attack in 2016 are treated as an “aggravated offence” rather than criminal damage. In turn, this would allow for increased sentences.

Further to Finn’s Law, a private member’s bill was proposed, the Animal Welfare (Service Animals) Bill by Member of Parliament Sir Oliver Heald. The bill completed all the parliamentary stages and received Royal Assent on 8th April 2019 as the Animal Welfare (Service Animals) Act 2019 and came into force in June 2019.  In September 2019, Nicola Sturgeon, announced that a new Animal Welfare Bill, incorporating “Finn’s Law”, would be part of the new programme of legislation to be introduced into the Scottish Parliament.

Dave and Finn continue to campaign for better sentences for animal welfare, with Finn’s Law part 2 which would extend the law for all animals.

There has been incredible support from the public and Finns Law Part 2  had its 3rd reading in the House of Commons on Friday, 12th March. The legislation now heads to the  House of Lords and we have every confidence it will soon be the law of the land.  This is another big step forward for animal welfare and a great accomplishment for Dave.

Congratulations to all the humans who have worked for so long to get to this point, and of course, to Fabulous Finn who continues to inspire positive change and embodies all that it means to be a SuperDog!

Do you know a SuperDog like Finn? Now is the time to tell your story.
Nominate now