MBE landlady and Greg the Superdog help those in need! 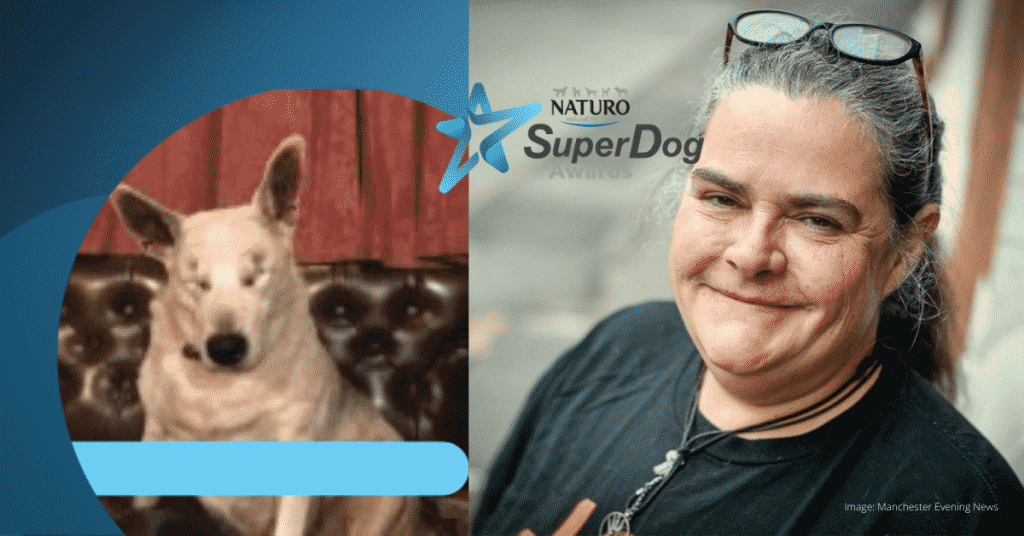 MBE landlady and Greg the Superdog help those in need!

It’s not every day that you hear about a home that houses both a woman recently awarded an MBE and a dog nominated for a Naturo Superdog Award! One such place is a pub in Ashton Under Lyne where a remarkable landlady has devoted her life to helping those in need and has humbly accepted the honour of an MBE title bestowed on her.

Pauline Town’s fundraising projects include sleepouts to help the homeless as well as giving out free packed lunches to those in need. Whilst Pauline is indeed an exceptional woman deserving of huge recognition and thanks, her faithful four-legged friend has proven he is a worthy companion to be by her side.

Pauline’s sister, Leah, has nominated her furry nephew for a Naturo Superdog Award, here she explains why: “Greg is my sister’s dog. He was a rescue dog and lives at the Station Hotel, a pub in Ashton under Lyne. Sadly last year Greg went blind overnight and had to have his eyes removed because of the pressure. But he has the most lovely nature, loves everyone and has such a waggy tail.

Greg has done sponsored sleep outs with my sister, raising money to help the homeless. My sister is amazing and has just been awarded an MBE for her services to the homeless. The Station is a community hub for those in need and every day when my sister gives out 100 packed lunches to those in need, Greg is there by her side giving a waggy welcome to everyone. He shares his treats with the doggies that come that are homeless, and with my sister, he has helped so many people.

Despite everything he has been through in his life, his spirit is unbroken and he brings a smile to everyone and love to all in need. Having been homeless himself before my sister adopted him 4 years ago, Greg so deserves recognition for his amazing achievements despite all he’s been through. Everyone who donates and helps out knows and loves him and the homeless people who come daily all love him too. Winning a SuperDog Award would mean so much to so many people if Greg was recognised in this way for his beautiful life and achievements.”

It is a humbling story and shows that a dog’s spirit keeps shining no matter what they go through.  Pauline has achieved so much, and I’m sure she would agree that her loyal friend has been a tonic to her throughout lockdown and an ever reassuring presence in her life as the heroic duo continue in their mission to make a difference to so many people’s lives.