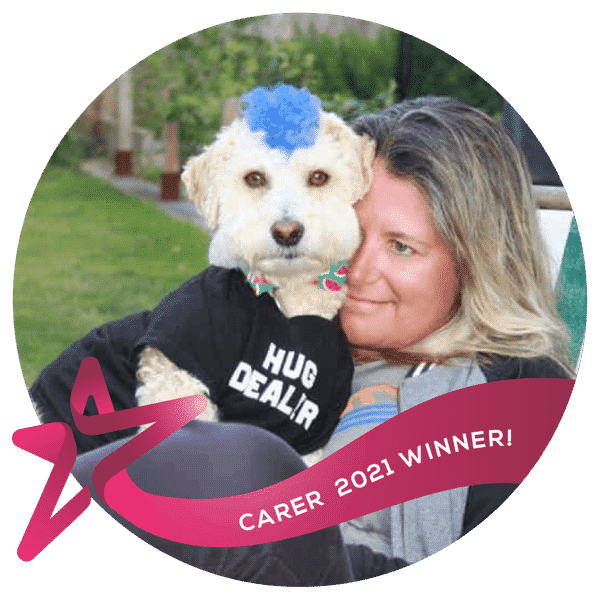 Scooter was thrown out onto the streets of Portugal when he was just a puppy. Luckily for me he was rescued by a wonderful charity called Dogs of Portugal and taken to a sanctuary called O’Cantinho Da Milu. Once there, he was put up for adoption and I saw a photo of him. Something in his eyes spoke to me and I brought him home to the South Coast.  He settled in really quickly. He was so laid back, nothing seemed to phase him and he was so loving and gentle.

I saw an article about therapy dogs and knew immediately that Scooter would be perfect for the role. I contacted Pets As Therapy UK and before long he had passed his assessments and was making his first therapy visits to a local care home. As expected he went down a storm. The residents and staff looked forward to his visits, saving up biscuits for him. He became so popular that word got around and we were invited to apply for a role at our local hospital, St Richard’s in Chichester. Scooter aced the interview and we were assigned to Lavant Ward which looks after people who have had strokes. Again Scooter was a huge hit. The staff had huge smiles when he came onto the ward. He gave them all cuddles, the visitors fussed over him and he gave them something to talk about and focus on, and of course, the patients adored him, especially those who were missing their own pets. Scooter helps with their physio, getting people to stroke him with their weak arms or take him for walks around the wards to build up their strength. Such is his empathy and intuition he seems to know the patients who are feeling really poorly or down and he pulls me over to their beds. He has also laid with end-of-life patients who either have no family or friends to be them or who are missing their pets. It’s extremely moving to see him snuggle up to them and a big smile spread across their face.

Scooter’s next assignment was to raise the morale of police officers and staff at London Police stations and custody suites. He was granted permission to attend Charing Cross and Brixton Custody suites to cheer up stressed out officers and staff and also try and calm and provide reassurance to vulnerable and violent prisoners. As soon as the prisoners saw Scooter they would immediately change their behaviour.  Scooter would enter their cells if he felt safe to do so and jump up on their beds and nudge them for a cuddle or a tickle. The effects were dramatic.

So Scooter was doing his thing, making everyone smile and happy and raising morale. Little did I know that his most important job was yet to come.
I didn’t realise it,  but I was slowly becoming mentally unwell.  Being a police officer of 24 years, 7 of which were as a Detective on the Met’s Child Abuse Investigation Team had taken its toll on me and led to me having a breakdown in May last year.  I was eventually diagnosed with Complex PTSD  and I suddenly realised why Scooter had been my shadow! He knew I was in trouble and had been trying to tell me for months. I realised that I had a perfect therapy dog for ME!! We became inseparable, doing as many things together as possible.

My most favourite things to do are Surfing and Paddleboarding and I wondered if I could teach Scooter to do these things with me so I could share my happy place with my best friend. I started to research online and found that not only could dogs learn to surf and paddleboard, but there are actually such things as Surf Therapy Dogs!! Yeeeeeeew! I had found Scooter’s next challenge.

Not wanting to frighten Scooter and to make sure I did everything properly, I reached out to the Surf Dog Mums and Dads in Southern California which is The home of Dog surfing and I was given advice on how to teach Scooter. We started off slowly, introducing him to the boards in the back garden, learning to balance, building up his core muscles and strength in his legs. Next, I took him to a local doggy swimming pool to get him swimming lessons and build up his confidence in the water. Then we progressed to taking his board to the pool and getting him comfortable standing and laying on the board on the water before finally, about 6 months after we started his training, taking him to the ocean. The whole experience has brought us so close, it’s a bond and trust that cannot be broken and it gave me something else to focus on while I recovered from my illness.

Today Scooter raises awareness of Mental Health by running his own Salt Water Therapy Sessions at our local beach under the umbrella of the global mental health charity, One Wave is All It Takes,  He has also just opened Scooter’s Surf School, helping teach other dogs how to surf and paddleboard with their owners and kids.

He still visits St Richard’s Hospital and the care home, and he also visits local school children who read to him to help build up their confidence. Scooter has become something of a local celebrity. He’s hard to miss with his electric blue Mohawk, something we had done to help start conversations about rescue dogs, therapy dogs and mental health. He has over 5500 Instagram followers ( Scooter_surf_therapy_dog) and has appeared on the BBC and ITV talking about Surf Therapy. He came fourth in his first Surf competition, run virtually from Southern California, and is due to take part in the UK Dog Surfing Competition in Dorset this July.

To top it all Scooter is currently training to be my full-time PTSD Assistance Dog via the charity Darwin Dogs. This means he can go absolutely everywhere with me to continue to support my recovery and help me deal with the anxiety I face every day as a result of my illness. Just think if his original family had not given up on him 5 years ago in Portugal and abandoned him to his fate I may not be here today to tell his remarkable story and he wouldn’t have touched the lives of thousands of others by making them smile.

Wowzers we are so excited to be finalists!

Thank you for your support!
Ahead of the judges’ decision, please help us shine a light on Scooter’s SuperDog profile page. Leave a message of support and share this page via mail, WhatsApp or socials. 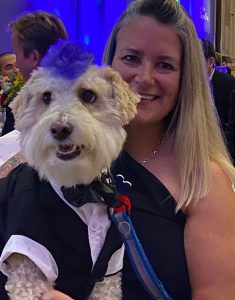 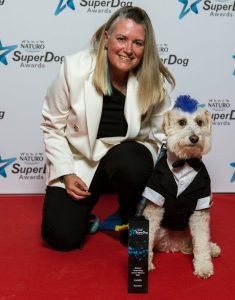 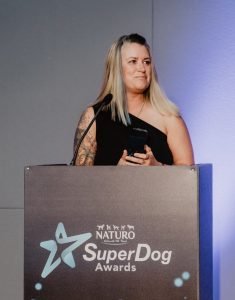 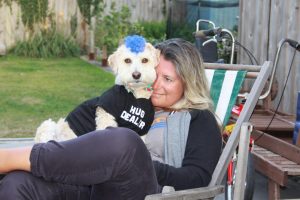 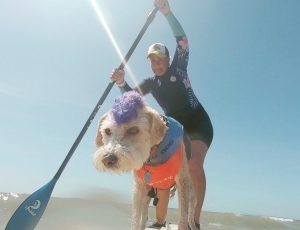 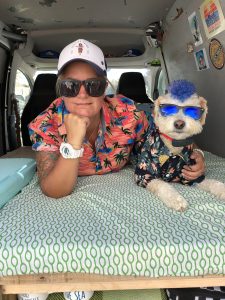 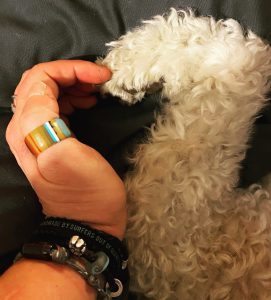 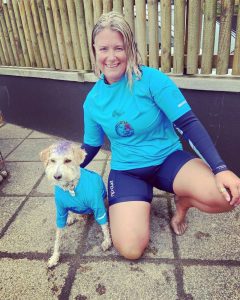 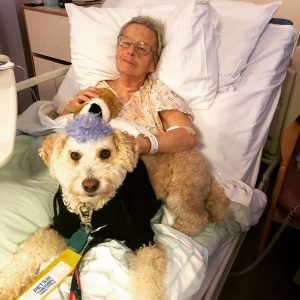 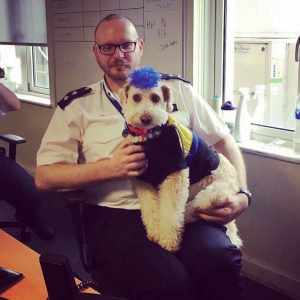 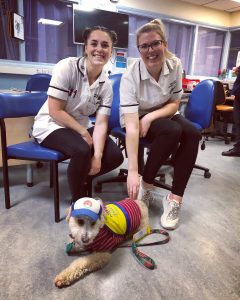 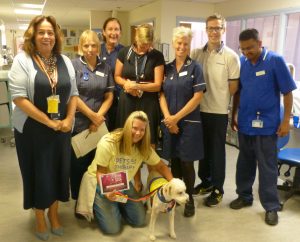 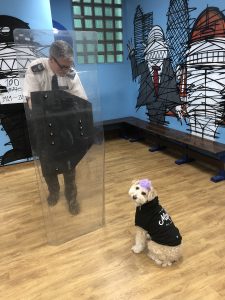 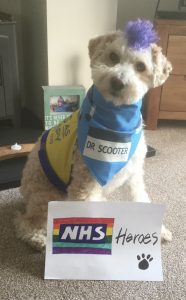 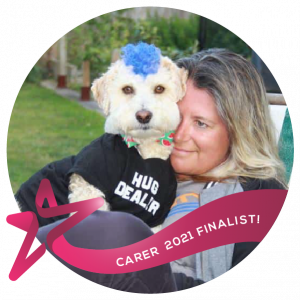 Show your support for Scooter

Good luck Scooter. You bring so much happiness to so many people from all walks of life and situations. I regularly follow your efforts, you are a super hero!

Congratulations to the wonderful Scooter on being a Carer Finalist 2021 and best of luck in the finals! You are our local hero and being totally paw some, so deserve to win!
Go Scooter!!!!!

Aww Scooter – we all love you. I have seen first hand you paddle boarding with a young man with autism and you helped him so much. He now looks forward to being out on the water with you and is building a love of the sea and being outdoors which is remarkable to see.
You truly are a special boy 🥰

Lots of love and luck to you both. So deserved to be in the final xx

Big Congratulations to Scooter on being selected as a Carer 2021 finalist! Pawsome! So well deserved my four legged friend!