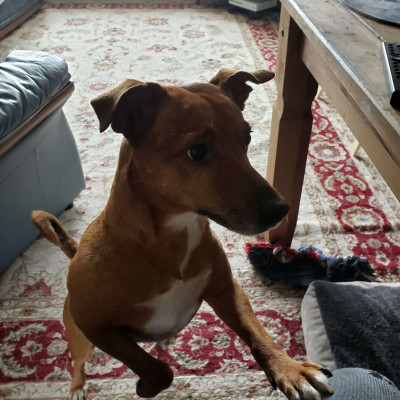 My little Blitzy is a rescue doggy.  He has had 2 previous owners who beat and abused him for 5 years of his life. He was made to fight hunt, kill cats -basically to destroy anything and everything. He was attacked with metal poles and was nearly killed by a wolfhound.

One day, out of the blue,  one of my neighbours came to my door and asked if I would take in a dog or it was going to be put down as it was too vicious. I said ok bring it around. An hour later a small, long-legged Jack Russell was produced. He was shaking with his tail between his legs. I asked my neighbour to explain everything to me. Basically, the last owner kept him in a cage and beat him every day, starved him and yet again made him fight. I asked his name and he told me his name was Blitz. So I sat on the floor, got down to his level so he could see I wasn’t going to hurt him, and he crawled into my lap. That was it.  “He’s mine,”  I said.

Since that day my Blitzy has completely changed.  He has PTSD and some mental health issues but I’ve let him become the dog he should be –  a loved friend. We’ve fallen out a couple of times when I’ve raised my voice to him, I can see he thinks he is gonna be beaten.  The bloke who Blitz was taken off came to my door and tried to get him back.  He even offered to fight me. So I said, “Alright then, I’ll fight ya.  I ain’t a dog.” He backed away as I walked towards him. I wasn’t joking. Blitzy’s mine now and I’m his.

He has saved my life as I was at the lowest part of my life having tried to take it twice before I got him.  Now I look at him and he knows how im feeling. He comes and gives me love and cuddles. Without him, I seriously wouldn’t be here. We’ve saved each other.  I give him the same protection as I give my daughter.  Slowly slowly we are working through his problems by being calm and letting him be a dog. My home is his home 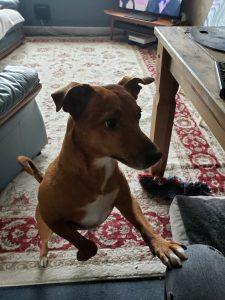 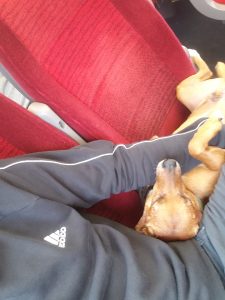 Show your support for Blitz