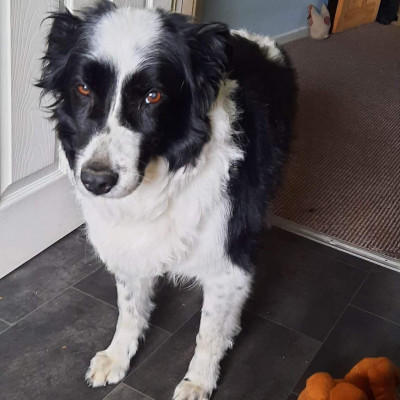 I nominate my dog Rex for a SuperDog Award. I rescued him when he was one year old as he was no used as a working dog. He was chained in a metal cage with no food or water and he had been bitten on his ear which had become infected. Thankfully the infection was caught in time and his ear was saved.  He had 4 baths before I found he had white in his coat and had a whole bag of matted fur cut off.

He became a loyal companion and came everywhere with me. When my son was born he took on the role of watching him all day and barking whenever he made a sound. He is now 16 years old and over the past 2 years, he has undergone surgery to remove a tumour from his bum and been sedated once again to sort his teeth out which were never great when I got him. He doesn’t have many teeth and drools so much, but we wouldn’t have him any other way. Rex has arthritis in his shoulder but that doesn’t stop him from going down to the park and running about with our ponies. He has a good relationship with the Clydesdale, which is an odd combination and you can find him lying next to her. He’s never aged and surprises the vet as to how strong-hearted he is. He shares a home with his wee jackawa friend, Jay, and they have become the best buds.

Show your support for Rex