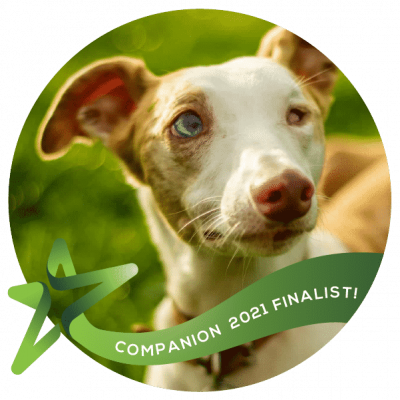 I didn’t know I needed Scout in my life until he crash-landed into it and changed it for the better.  I had tragically lost my first dog, a whippet called Ruby, following an incident with another dog whilst we were out on a walk. Ruby died in my arms. and I suffered from terrible guilt that I couldn’t save my beautiful girl. This resulted in a spiral of anxiety, depression and a fear of walking Izzy and Misty, our subsequent whippets.

We weren’t looking for another dog when we heard about the plight of a blind lurcher puppy who had been saved from a pound and taken to a local rescue centre – East Midlands Dog Rescue. Scout had been picked up on the streets of County Durham and narrowly escaped death in the pound.  But thanks to the combined efforts of three amazing rescue organisations, his life was saved. The day my husband and I first met Scout, we knew he had found his forever home and that he would never feel alone again.

We had a decision to make about how best to care for Scout. Because of his blindness, we could either wrap him up in cotton wool or we could give him the opportunity to live a full and normal life. We opted for the latter and Scout has continued to amaze us every single day with his tenacity and zest for life.

From the outset, I realised I would have to conquer my fear of walking outside. I was going to be Scout’s eyes, and he needed me to be confident to keep him safe. I knew I had to do this for Scout (and myself) and that’s what I did. Walking Scout gives me confidence and the courage to face the world. Scout has exceeded our every expectation, passing his puppy classes with flying colours and achieving his Bronze Good Citizen award. He has climbed mountains, paddled in the sea,  and run and played on sandy beaches with his pals. He has enabled me to do things I would never have dreamt of.

Scout and I are a great fundraising team for East Midlands Dog Rescue and we have attended many events together. He is also a much-loved Therapy dog and has also become the adopted mascot of a local Carers Cafe, which is part of a social prescribing program to help reduce the number of antidepressants being prescribed, a project very close to my heart.

Scout has opened so many doors for me and has even allowed me to pursue a life-long ambition to become a published author.  I now have three books to my name,  two of which feature Scout. Lockdown has been tough for sure, but Scout and I have loved our daily walks, discovering new routes and enjoying the sounds of nature. Scout also gives me daily routine and structure, which is much needed at the moment. He has battled some health problems over the past couple of years and underwent major surgery to remove a potentially life-limiting tumour on his flank.  But in true Scout style, he has bounced back.

Scout is my rock and my best friend.

Read More about Scout The Blind Lurcher – A Lifesaving Friendship

As finalists, Tracey and Scout are now counting down to the evening of the 9th of November in London where the winners of each of the seven categories will be presented with their SuperDog Award. Ahead of the panel of dog-loving celebrity judges making their final decision, please help shine a light on Scout and leave a message of support for him below. 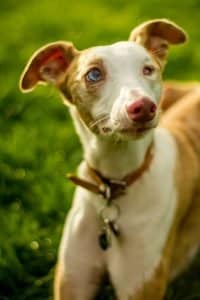 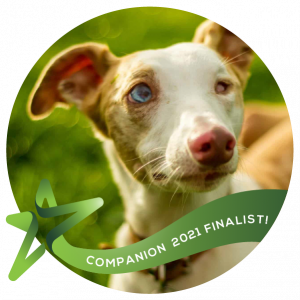 Show your support for Scout

You deserve the award Scout for being a special dog to all those you meet.❤

I love you Scout, you are a brave soul and give inspiration to many. Good luck for tomorrow I will have my fingers crossed and Harri will have his paws crossed. ❤️❤️

Scout we love you and Tracey. You are the real deal when it comes to the companion category. Scout is a one in a million.

What an Amazing Dog.
Life has been Cruel to this Poor Pup but rather then curl up and give up he bounced back I’m Style.

If Scout was Given Lemons he would Definitely make a Good Jug of tasty yet zesty Lemonade.

Come on Scouty! Loved by all who know and follow you. The sweetest boy – with the biggest heart. Gentle hugs and good luck sweetheart xx

What an amazing dog and owner, I truly hope Scout wins, you both so deserve it, sending healing love and all the best for the future.

What an appropriate name for such a special dog. Go Scout !

Such a gorgeous boy, fingers crossed here for Scout 🤞🤞❤❤

Good luck for the competition 🤞🤞🤞

Scout I could tell you were a superstar from the first time I saw you on the tellybox. You are a winner already in my eyes due to your incredible story, best of luck in the final xx

Overcoming his own disabilities and helping others in so many ways makes Scout a very special dog. I do hope he is recognised for all the joy he gives, and is the winner of Companion dog 2021.

Scoutie you are so inspiring and I love you even though I’ve never met you. Meeting you and giving you a big hug is very very high on my to do list. Lots of luck Scout xx

Scout, Your courage and resilience is testament to your soulful spirit. Adversities in your life made you who you are exceptional authentic beautiful precious Scout. A winner in this world

Scout. You are a 🌟
So well done

Good luck Scout.
You are a very handsome boy who is much loved by your family. 😍

Good Luck Scout you are a Big Superstar ❤

I have known Scouty for 10 & a half years, he is absolutely amazing! There is nothing he cannot do that other able sighted dogs can! His support & bond to his Mum Tracey is second to none, they literally live & breathe together each & every day!
A incredible intuitive boy that gives his all in to everything he does!
Good luck sweet lad xxxxx

Scout, you are such an inspiration.
Every time I read your Facebook page I am in awe of you.

Well done Scout, you are such an inspiration! 😁

Good luck Scout you so deserve to win

Good luck darling Scout. Such a very special boy, always happy. He has helped me on occasions with my anxiety, just meeting him and one of his very special cuddles can make everything feel alright. X

Love you little man. Save a kiss for me ❤️

Scout is such a happy boy despite his disabilities and he gives so much joy to everyone who knows him and his lovely family! He’s overcome every difficulty and just wants to give pleasure to everyone he meets! He’s totally unique!

I adore Scout. He is such a massive personality full of love…..and fun!
❤

This wonderful dog is more than a companion. He Is a lifesaver

One extra special dog , loved by his family but all over the country , such a special boy <3

Well done Scout, little Mae and I would like to show our love xx

This little chap is a true inspiration! He has had to deal with so much over the years and yet he bounces back. He’s simply a superstar!

Scout is an inspiration and a loving dog. So friendly and full of life. He warms my heart. X

Scout is such a special boy, we feel very blessed to have got to know him x

Well done Scout.
No one deserves this award more than you.
You have a special.place in everyone’s heart x

Scout you are adorable. An exceptional boy.

Scout is such a special hound and an inspiration to us all. He teaches us humans to appreciate every precious moment in life. He brightens my day. Good luck Scout!

A beautiful boy loved by soo many for all the things he does.

Well done Scout, such a very special boy and an example to us all. ❤️ xx Everything crossed for you sweetheart.

I was so lucky to meet Scout a few years ago. He is an amazing boy and I adore him. He will always be a winner in my eyes ❤❤

What a wonderful lad our Scouty is👍🥺🐸

Scout is just the sweetest dog!!!! Love seeing his journey ❤

well done Scout such a loving sweet boy. Zara and Pheobe and i have oir fingers crossed and paws love you

A huge thank you to everyone who voted for my boy, Scout and for taking my amazing boy into your hearts xx