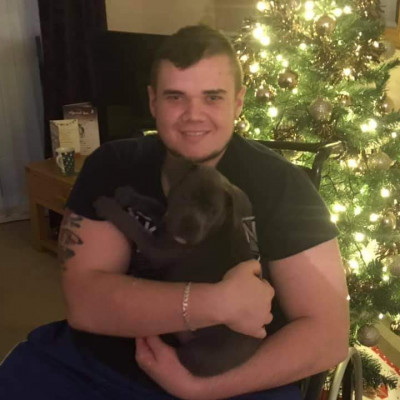 This beautiful boy has been the inspiration to carry on with the life of my son following an horrific car accident which changed his life forever. His owner George had life changing injuries, PTSD, clinical depression and near to suicide.
Diesel came into our lives as inspiration and a reason for my son to survive his horrific injuries and a focus on his recovery. Diesel has been at my sons side since returning home from hospital. My son was critical, and we were told he would not survive. He lost his leg, had sepsis, was placed into a coma and were called in to give our final goodbye. We decided that we would get a dog if our sin survived, something my son always dreamed of. We spoke to our son during his coma, giving all the encouragement possible and telling him we’d get him a dog for when he came home. Over the following days George came around from the coma and a long way to go to ne out if the woods, but the talk of getting him his dog seemed to spur him on and I swear helped. Moving forward in time. Our sin came home and a week later Diesel arrived. The love story began. They both fell in love with each other and Diesel gave our sin the reason to get out of bed and care for this beautiful bundle of fur. Without Diesel, I don’t believe our sin would be here today. The bond they have is amazing. Our son knows he has to care for his best friend and has said without Diesel he could not have done it, and come this far. Diesel is now 2 and is very much a big part of our family. I owe so very much to this big fur ball for saving our son. 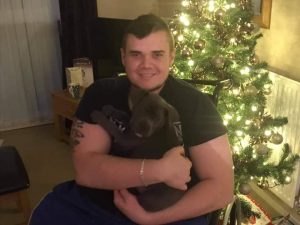 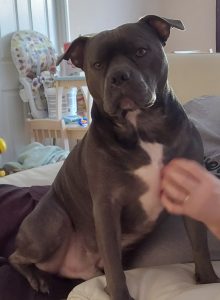 Show your support for Diesel