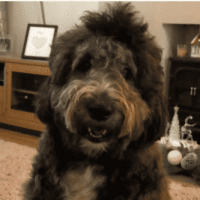 The team at Anderson Moore have been nominated for a SuperDog Award by Cliff and Kerri Simm, the grateful parents of a year old Sheepadoodle named Shelby.

In March 2021, Shelby was admitted to her vets for a routine spay procedure. Four days after her operation, Shelby’s owners noticed that her wound was opening and some of her intestines were poking through the opening. You will be reassured to know that this is a very rare occurrence and Shelby was very unlucky.
Shelby underwent revision surgery but the following evening, she started to deteriorate and her abdomen was becoming increasingly painful. The next morning, Shelby was referred as an emergency to AMVS.

After emergency stabilisation, Shelby underwent a second revision surgery. She had developed septic peritonitis (infection in the abdomen/belly) and this sadly carries a 50% mortality rate. One major concern was whether there was enough healthy intestine left after removing the damaged part. During surgery, a large amount of infected fluid was identified alongside the breakdown of the intestines. Shelby’s intestines had come together (adhesions) into a single clump and were stuck to the surface of another abdominal organ, her spleen. The adhesions were gently removed to reveal the broken-down part of her intestine. The intestine was repaired for the second time, her abdomen was lavaged (washed) and during the surgery, a feeding tube was placed to optimise Shelby’s nutrition in order to aid her recovery. Shelby was at risk of multiple organ failure after the surgery and being so sick and it was possible that the intestinal repair could break down again.

After a week of intensive management and close monitoring in our high dependency unit, Shelby was well enough to go home. She has since been back for a re-examination and we are all delighted by her progress.

Unfortunately, even routine surgery carries a small risk but thanks to Shelby’s truly dedicated owners and the team at AMVS, she is well on her way to recovery. 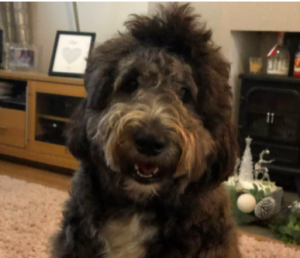 Show your support for Anderson Moores