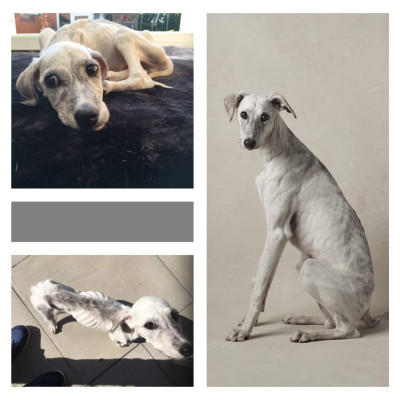 Mouse was found abandoned on a rubbish tip as a tiny puppy along with his two siblings. The lady who found them took them home and soon realised that Mouse was very sick. All three puppies were eventually signed over to a local rescue centre and Mouse was rushed to the vets where he underwent numerous blood tests, X-rays and exploratory surgery to try to find out what was wrong with him. Mouse’s stomach was full of bits of plastic and he was also diagnosed with coccidia. He was placed on intravenous fluids as he wouldn’t eat or drink. He didn’t respond to treatment and his veins were collapsed, meaning it was becoming difficult to maintain his drip. He was eventually discharged back to the rescue centre where it was thought he would just fade away if he couldn’t be persuaded to start eating and drinking.

I met Mouse at the rescue centre and I couldn’t believe this tiny little scrap was still clinging to life. Three times over the next few days Mouse was booked in to be put to sleep, but something in his eyes said he wasn’t ready to give up. I was there the day Mouse took his first few laps of water. There were a lot of tears that day. I offered to foster Mouse to help him with his recovery. He was very weak and had no muscle on him at all, not even enough to be able to chew food. Mouse needed a lot of nursing care – hourly feeding and assistance to walk (we got him a buggy to travel around in) and massage/physio to help his muscles to develop. Eighteen months down the line, we failed hopelessly at fostering and Mouse is still with us. He is now a strapping big lad!. Mouse’s journey hasn’t been easy. As a legacy from his first few weeks of life, Mouse was a terrible resource guarder and remains terrified of confined spaces (he was kept in a cat basket for a few days when he was first found) but with time and patience, he is learning that his world is safe. Sadly, Mouse’s siblings Twiggy and Demi did not survive and as such, Mouse will live the best life in their memory. Mouse is living proof that you should never give up! 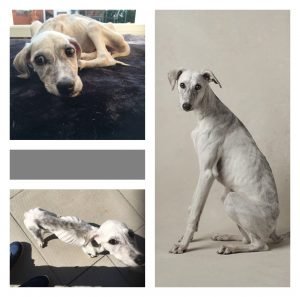 Show your support for Mouse