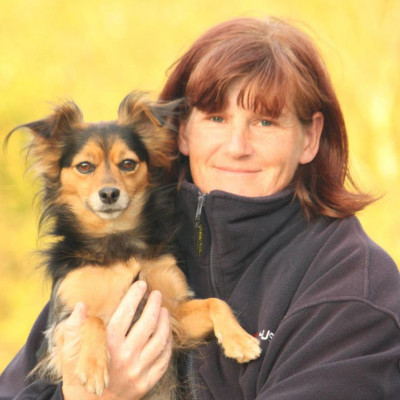 Ruby came into my life as a 7.5-week old puppy. We were looking for a small dog for my daughter Nicole when I was told about some puppies that someone I knew had. When I phoned and asked about them I was told sadly that they all had homes waiting for them. About a week later I got a phone call from the same person that had the puppies. A couple of people had pulled out of wanting the puppies and she asked if we were still wanting one. The next day we went to look at them all. They were all bounding around like loons, chasing, and playing with each other, apart from one tiny puppy which just sat in the corner of the room away from the other pups. The owner of the puppies said that this poor little girl was bullied by her litter mates and was so scared of the world.  Well, a lump stuck in my throat as I was taken back to my childhood and all the memories came flooding back of the torment I went through for 6 years at school with bullying. It started just after my dad had died when I was just 11 years old, and my life as I knew it had ended.  We decided to give this very special little girl a chance that I never had, a way out from the sadness and torment that I had gone through, and we took her home.

After suffering from depression for over 25 years and going in and out of therapy, Ruby has finally given me something to live for.
Losing my dad and the constant bullying I suffered, the name-calling, being punched and slapped, spat on and told how useless I was and I would never amount to anything in my life, I was beaten, I lost all my confidence.  When you hear things like this for so long you start to believe it.   Ruby followed me wherever I went, never ever left my side.  I was having the worst time mentally and I attempted to take my life. I locked myself in the bathroom with things I shouldn’t have had. All I remember is Ruby outside the door barking, crying and scratching trying to get in. I must have not shut the door properly and I heard it click open. I walked over to the door and Ruby ran at me barking.  All of a sudden it seemed as if a light had been switched on in me that had been out for so many years. I felt an overwhelming love for this very special little dog. Ruby did for me what therapy couldn’t do. Ruby had given me my life back. From that day on, my life changed. Ruby gave me the confidence to get out and start meeting people again. I have now met some lovely people because of Ruby. Just a year after getting her I was diagnosed with skin cancer. Ruby gave me the strength to carry on through the treatment and the two operations I had to remove the cancer. She would come running to me when I came home from the hospital and would never leave my side. Thankfully I am now all clear. Because of Ruby’s love and the new outlook on life that she had given me, I was able to do what I always wanted to do and that was to work with dogs. I am now a dog trainer and dog qualified dog behaviourist.

It’s not just my life Ruby saved,  she also saved the life of my daughter and my unborn granddaughter.  My daughter Nicole was 7 months into her pregnancy when she started to feel really unwell. One particular day, Ruby kept barking at Nicole and following her everywhere. Each time Nicole sat down Ruby would jump on her lap and sniff Nicole’s belly and rested her head on it whining. It was like she was telling us that something was wrong. Ruby right. Nicole was admitted to the hospital that night with pre-eclampsia. A few days later Nicole had an emergency C section and my granddaughter Emily was born weighing just 3lb.  I came so close to losing my daughter that day and if it hadn’t been for Ruby I know that my daughter and granddaughter wouldn’t be here today.  Emily is now 4  years old and she and Rub are best friends.

The day I brought Ruby home. I thought it was me saving her but the truth is she save us all. That’s why I’m nominating her for a SuperDog Award. 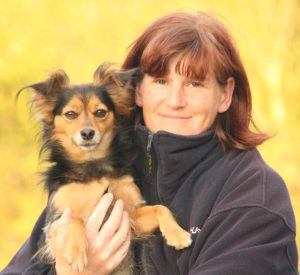 Show your support for Ruby Roo