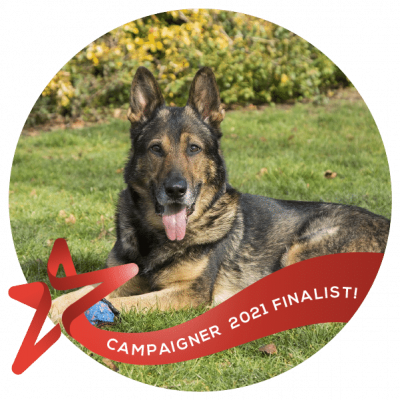 On 5 October 2016, PC Dave Wardell and his police dog Finn were called to an incident in Stevenage where there was a search for a male suspect, believed to be armed. PC Wardell and Finn located the suspect who ran off. After a shouted warning, PC Wardell released Finn and the dog seized the suspect’s leg as he was attempting to escape over a fence. As he fell, the suspect viciously stabbed Finn in the chest with a 10-inch hunting knife, before making a second attack directed at PC Dave Wardell. Finn bravely dived in front of his handler and dad to save his life. Finn suffered another wound to his head and was left bleeding profusely. Despite this, Finn retained his grip on the suspect, enabling PC Wardell to disarm him. When other officers arrived, Finn was taken to a vet immediately where he underwent emergency surgery in which part of his lung was removed.

Finn recovered from the attack and returned to duty just eleven weeks later. In May 2017 at Stevenage Youth Court, a 16-year-old boy from Lewisham in south London was convicted of assault occasioning actual bodily harm for the attack on PC Wardell, but shockingly, could only be convicted of criminal damage for stabbing the dog. The attacker was sentenced to eight months’ detention in a Young Offender Institution.

Since the attack, Finn retired shortly before his eighth birthday in March 2017. Since then, Dave & Finn have campaigned tirelessly to change the law to protect dogs as loyal public servants.

Finn’s case highlighted the limited legal sanctions available against those who injure animals being used by the emergency services. Dave created an online petition for “Finn’s Law” which attracted more than 127,000 signatures, to make sure crimes like the attack in 2016 are treated as an “aggravated offence” rather than criminal damage. In turn, this would allow for increased sentences.

Further to Finn’s Law, a private member’s bill was proposed, the Animal Welfare (Service Animals) Bill by Member of Parliament Sir Oliver Heald. The bill completed all the parliamentary stages and received Royal Assent on 8th April 2019 as the Animal Welfare (Service Animals) Act 2019 and came into force in June 2019. In September 2019, Nicola Sturgeon, announced that a new Animal Welfare Bill, incorporating “Finn’s Law”, would be part of the new programme of legislation to be introduced into the Scottish Parliament.

Dave and Finn have successfully campaigned for increased sentences for animal welfare, and Finn’s Law Part 2 was passed in May 2021 extending the law for all animals. 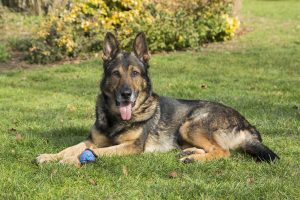 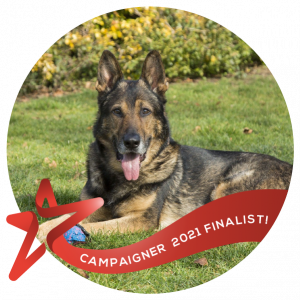 Show your support for Fabulous Finn

An incredible achievement, not only once with Finns Law but with Finns law part 2, and far and wide. Simply incredible.

Fantastic Finn and his human family have made a terrible attack into something positive.
Bringing to peoples the attention the injuries and suffering inflicted onto a police dog, in the line of duty. An animals life is as important as a human.
Funn is an amazing dog that has continued to battle and overcome all that life throws at him. A very special boy.

What Finn and his human team have achieved is incredible and is more than a worthy winner of this category. Such a brave and wonderful dog. Bless you Finn X

An brave and loyal dog, a very distressing story and a determined Dad.
Finn recovered and joined in his Dad’s campaign to ensure service animals are never again treated as mere ‘property’ when they are injured in service.
A worthy finalist, and I wish you all the best, lovely lad x

When ii read Finn’s story, I cried. Such loyalty show by Finn to Dave and vis versa. Their campaigning for Finn’s Law has been an amazing journey and influenced and inspired so many.

Amazing dog , amazing owner . You have turned something that was so terrible and used it to change the law !

I have followed your story. Read your book and met you and Dave.
You deserve to win hands down… A true hero and best friend 💖

i am remember this story. a story of true bravery and loyalty to protect your human. bless you, you truly deserve this

An amazing story, you are a true hero. You and your human deserve to win. 🤞🤞🤞

You are are fabulous. You and your human make a great pair

An amazing story of strength and determination to ensure justice for those in the future, tireless work 🙂

What a wonderful dog. They are truly our good friends. That boy intended to harm man or dog and needs to learn a lesson. The law must protect our police dogs as they do human police.

Well done, best wishes you so deserve all the love Finn, Brave boy﻿❤﻿

Finn is a hero to me for what he did for his handler, Dave.

He deserves to win this award.

They have worked so hard on changing the law, a knighood should be on the cards for him and Finn, changing the law such an achievement well deserved and great work guy’s.

Dave and Finn so deserve this award because of their tireless work for both working dogs and family pets. They (dogs) are members of the family and Dave and Finn’s work for increased penalties for all animals is awe-inspiring!! Much love to them both for their work!

A total committment to policing by both dog and handler. They have worked together on shift to serve their community, support other officers, victims of crime and each other. The commection between most police dogs and their handler is a sight to behold. And on that one night Finn was willing to put himself first to save the life of his handler. And then Finn was the focus of prayers and good wishes from across the world. An anxiety and shock where love, togetherness and amazing committment between Dave and Finn was key to getting better, or to the absolute best they could both be.

Then came the tradegy of legislation being inadequate to take into account that the circumstances were at least the attempted murder of a police service dog. Dave and his family along with Finn, began to campaign for Finn’s Law.

At every turn the Finn’s Law campaign gathered speed with recognition no matter where they were, what they were doing, who they were doing it with (Thank you Simon Cowell and BGT), how they were behaving (Finn and his little bark in the House of Lords).

It was key to ensure that the law makers understood the who, what, when, where, how and why Finn’s Law was essential for our society, our communities. To protect service animals is one thing, but service animals protect more that their handler. They stop the bad guy who yes may have been attacking the service dog and or their handler. Attacking or threatening members of the public. Recovering stolen goods, money, drugs, ammunition and weapons and in some circumstances explosives. Too much to say here. In relation to Finn where would we be without this wonderful dog’s campaigning and I suppose Dave must be included too. They are a relentless pair. They have the ultimate connection, they have made a difference and continue to do so. #respect #finslaw

RPD Finn and PC Dave Wardell thoroughly deserve to win this award. Finn saved Dave’s life, getting seriously injured & almost lost his life in the process. After sharing Finn’s story, it gave us all the chance to support Finn’s Law & Finn’s Law part 2, so that both service animals and domestic animals are now not classed as property, but have proper protection in law. Dave & #Team Finn worked tirelessly to make this happen. The bond and understanding between Finn & Dave is so strong.

Brave Finn so deserves to win this category. He helped change the law which is no small feat.

Finn is 2nd to none in loyalty and bravery and has been such an inspiration to so many with his courageous fight back from the brink of death after taking several stab wounds defending his owner……..Finn is the most deserving winner in any category

Finn is an inspiration to us all and has achieved so much, along with his dedicated, campaigning humans. You completely deserve this award for all of your tireless campaign work on behalf of animals without a voice. Best of luck Finn!

PD Finn served as a loyal and brave police dog alongside PC Dave Wardell and was an amazingly successful police dog. Through continuous training he formed an extraordinary bond with his handler and they became an incredible duo who searched for vulnerable people in need of urgent help as well as suspects and criminals. Their bond developed over years of spending every day together. When Dave’s life was in immediate and real danger there was no hesitation in Finn’s mind about what action to take: Finn put himself in between a 10 inch vicious blade and his best friend to protect Dave’s life, risking his own life in so doing. Finn and Dave turned this negative into a positive by campaigning – along with the support of #TeamFinn – to ensure the law was changed so that service animals are no longer regarded in law as mere property by the introduction of #FinnsLaw. In addition, all domesticated animals now benefit from the increase in sentences (from 6 months to a max of 5 years) due to the introduction of #FinnsLawPart2. Along the way both #FinnsLawScotland and #FinnsLawGibraltar have been introduced.

RPD Finn #FabulousFinn deserves to be recognised as the winner of 2021 Campaigner.

PC Wardell and Fabulous Finn have worked tirelessly to get #FinnsLaw and #FinnsLawPart2 into the statute books, both are now law and both Service Animals and pets will benefit from the increased sentences now incorporated into Finns Law Part 2 under the Animal Welfare Act.Finn was even present at many a House of Commons session and at least one session in the House of Lords while the debate was going on.I believe that he barked his approval in the Lords when the third reading of the Bill got passed ! Thoroughly deserve to get this award for their dedication to getting both campaigns through.

Dave Wardell and Finn have worked tirelessly to have the law changed to protect service animals. Finn is such a hero and shows us all the bond between dog and handler. Good luck Finn, you’re amazing.