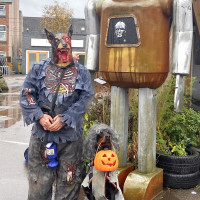 My gorgeous Dobermann, Jackson was diagnosed with the life-shortening disease, DCM, at the age of 20 months old with the added complication of having AF along with it. Despite this devastating condition, Jackson helped me through such a difficult period of my life after suffering from severe depression and anxiety, COPD and having AF myself, along with glaucoma in both eyes. After dedicating my time caring for my mother who sadly passed away, and forgetting about my own health, Jackson was bought for me as a gift from my son in May 2018. He became my soulmate and my strength to battle with what I was going through and his zest for life and the joy he bought to me and so many others was incredible. I could never thank him enough.

Sadly my precious boy passed away on February 8th 2021, a day before his 3rd birthday. But during his very short time on this earth he helped raise over £10,000 for Lincs Dobermann Rescue by doing sponsored walks, trick routines on social media, coming into Coventry City Centre in fancy dress at Christmas and Halloween with a collection tin and doing tricks so people would donate. He performed routines to celebrate St. George’s day, Captain Tom’s 100th birthday, VE Day and supported the bags through the pandemic with even more trick routines he learnt. We even got mentioned on GMB for celebrating VE 75th anniversary at home due to Covid.

Jackson gave people hope and provided so much entertainment through the very difficult time of the pandemic and so many of his trick routines have been shown on social media so many times. He has appeared in Your Dogs magazine and Dogs Today magazine and while being here for just under 3 years he won so many awards, certificates and medals for what he could do. His intelligence was out of this world and the bond we had could never be matched. He was a dog in a million, and even now after his death, we still continue to raise money for the RVC in London to research into DCM with a Facebook group called Jackson and Friends Against DCM. To date, in such a short time, we have raised £2,400 in Jackson’s honour. The beautiful boy left a legacy and really did prove how incredible the Dobermann breed can be if trained with fun and happiness which we had from the moment I had him. If ever a dog deserved to be recognised with a Naturo SuperDog Award it would be Jackson. He even rescued a drowning dog from a river and received a medal from Lincs Dobermann Rescue for his bravery. Jackson was my soulmate, my life and definitely my heart dog who I miss dearly ❤️ 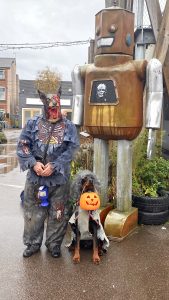 Show your support for Jackson