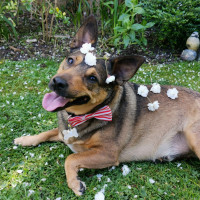 Turvey came from Ireland through Dogs Trust. He was found wandering the streets at 5 months old! He had a massive wound to his neck which was as deep as his windpipe. His windpipe then got infected. When Dogs Trust found him, they did emergency surgery on his neck and had to remove half of his windpipe! He now lives with half of a windpipe and it can cause some breathing problems, especially when lifting his head up too high.

He also had a wound on top of his nose near the end which has left him with a small curve in his nose. Turvey has a sensitive stomach. He is allergic to dairy, wheat, grain and chicken, which makes his stomach bloat causing him pain. He shows me by shaking, and because he can’t physically be sick himself, I have to massage his stomach to see if it helps move/ push out sick etc. Most of the time it just lets out gas and not the sick which is needed. Turvey’s lining of his stomach is very thin and weak and has a small hole in the stomach which if food leaks out it can make him very unwell. As it’s outside of the stomach it can move to other organs so we have to be careful which foods he has and how much. He also has eczema, so we have to check on that too in case he scratches too much and makes himself bleed. He has other conditions causing him to struggle to go to the toilet. With early-stage kidney disease, it causes him some discomfort and he is unable to eat probably and sleeps more than normal.

Turvey really tries to have a normal life as much as possible on good and bad days. He just wants cuddles. With the struggle he has with health, mainly his windpipe, he is lucky to be alive. His epilepsy can also cause memory loss and affects his vision. He may seem normal but he can really struggle. Turvey now has a loving home and neighbourhood where he is well known and loved by many. He is lucky to be here today.

Turvey is now a working/service dog for me. He keeps me calm as I panic about who is there helping. With autism, I have trouble with strangers, so Turvey helps just by being beside me. He does an amazing job being a therapy dog for my autism, depression, anxiety and all my difficulties. I was very suicidal, but having Turvey by my side has made a huge difference, keeping me going and showing me that suicide wasn’t the way.

He has changed so much in my life for the better and I couldn’t be more thankful to him for being with me all the time. He rescued me from my pit of misery like I’ve rescued him from the bad start he had as a pup! He keeps me going and travels everywhere with me, locally to the shops, or weekends away. He has been on a submarine, a steam train, boats and much more. We do a lot of re-enactments, camping, dog shows, dressing up, all the time. He loves it, always has a smile on his face and posing for the camera! Turvey has his own Facebook page called Turvey’s Tales. He makes me proud every day watching me 24/7 and making sure I’m ok. I have my bad days and good days and he knows what to do to help – lots of cuddles for one. He has come so far already in his life.

At just 6 years old, he is doing an amazing job, learning new tricks when he is feeling ok and helping out around the house putting the rubbish out, passing the pegs when putting the washing out plus many more. Turvey is my hero and he deserves a SuperDog Award. 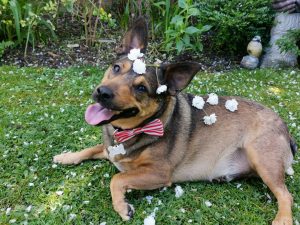 Show your support for Turvey