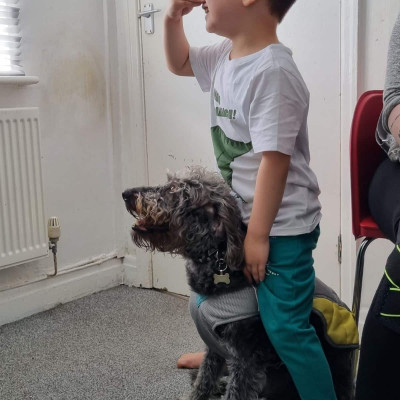 I chose the SuperDog hero category for Buster because he fills pretty much all of the categories you are looking for in nominees. Buster hasn’t had the best start in life. He was in the streets at a young age and spent time at stray aid before we adopted him. Since then he has become a member of the family and has been a massive source of comfort to my partner who had recently lost her sister and father within months of each other. My partner suffers from depression and aggrophobia which means she finds it difficult to leave the house. But Buster supports her massively and will put himself between her and anything he perceives is a danger to her. The first day we got Buster, we took him to meet my nephews and he fell asleep on the floor. My nephew has autism and he grabbed Buster by the tail and tried to pull him across the room. Emma and I had a bit of a panic as we had just got him and had no idea what his temprement would be like. Fortunately, he just looked up at Thomas, smiled and then plopped back where he was. Buster has always been lovely with kids and people and his default position is to try to cheer people up if he can see that they’re upset. For all these reasons and many others I think Buster is a superhero and deserves the nomination. He is already my little superhero and the best doggy son I could ask for. 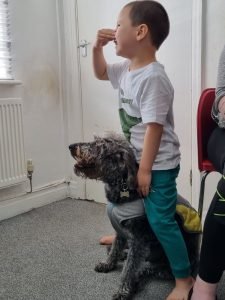 Show your support for Buster