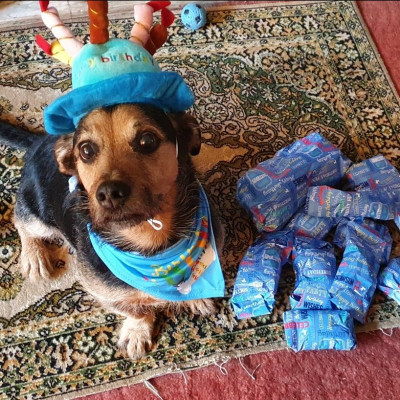 Alfie has had a really tough year. Back in February last year Alfie was playing fetch when he ran in an awkward way and instantly started limping. We took him to the vets and we were told that it’s likely he had a ruptured cruciate. He needed an x-ray to confirm. We were asked if we wanted a routine blood test before going under sedation for the x-ray which we agreed to. We then received a call telling us there was a problem with the bloodwork in relation to the liver. After lots of tests, we then got the awful news that Alfie had liver cancer! The ruptured cruciate had to wait and he was referred to a specialist. We were told that primary liver cancer is very rare in dogs so it was likely to be a secondary tumour, meaning he had very little chance at survival. He was admitted to the hospital for further tests. Remarkably the cancer hadn’t spread and was contained in the liver. However, the mass was huge, taking up over 80% of his liver and they were unsure if they would be able to successfully remove it all. But without surgery, he would only have weeks to live. So we opted for surgery. Alfie was admitted again to the hospital and had successful surgery. The surgeon was confident that she’d removed all of the cancer but we wouldn’t know for three months. Alfie had some complications post-surgery and ended up being in hospital for nearly a week. He has severe separation anxiety so this was a really stressful time for him and he stopped eating. When he finally came home he had lost a lot of weight and was a shadow of his former self. However, once home he starting eating again and recovered well from the surgery. After three months he had a scan and we were dealt a blow when we were told cancer had returned. So Alfie was admitted to the hospital again for lots more test. Luckily it turned out that the new mass wasn’t cancerous and was just scar tissue from the liver repairing itself. However, they noticed that one of his liver levels was still raised which was unusual with the cancer gone. So he was referred to an internal medicine specialist and after yet another admission he was diagnosed with Cushing’s Syndrome which he now gets medication for, for the rest of his life as well blood tests every three months. After another three months, Alfie was admitted again for scans and bloodwork. The mass in his liver had remained stable and we were finally given the all-clear for him to have surgery to fix his ruptured cruciate (8 months after rupturing it and limping around). He recovered well, his cancer was still in remission and his Cushing’s under control. However, just three months later Alfie started limping again on his other back leg. Another admission to the hospital showed he had now ruptured a second cruciate. So yet again another surgery and admission. Again the surgery went well and a few months later he was doing really well. Then a month ago he started showing signs that his Cushings wasn’t under control so back to the vets again and we needed to double his dose to two pills a day. Today he is a very happy and healthy dog and we just cross our fingers that he is now OK.
It’s been an incredibly tough 16 months, to summarise Alfie had cancer, was diagnosed with Cushing’s Syndrom and had two ruptured cruciate! He has been to the vets more times than I can count. He is now terrified whenever he goes in the car as he knows that means the vets again. However, he has accepted everything thrown at him and at 10.5 he’s done incredibly well to overcome so much in such a short time frame. He is a SuperDog and extremely worthy of this award!!

This photo is of Alfie’s 10th birthday last year, something we didn’t think he would make! 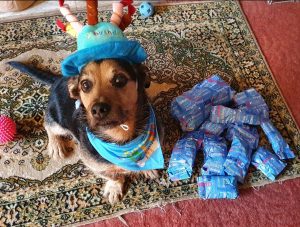 Show your support for Alfie Carpenter