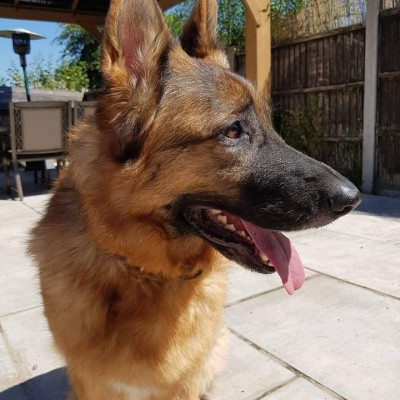 We adopted Missy nearly 7 years ago.
What we thought would be an easy adoption due to our experience with the breed was soon shattered. The poor girl sufferer from so many types of anxiety and aggression we soon felt out of our depth: from dog and people aggression to food aggression and anxiety to the point she would eat away at herself when left. She appeared to have never experienced the things we took for granted and we knew we had a journey, especially having our dogs with us too which she hated and couldn’t be in the same room with. Returning her wasn’t an option as we knew the possibility of her being put to sleep was real due to the number of issues she had.

Day by day we had to teach her to trust us. We would often take one step forward and 3 back, but we loved her and would never give up on her. The main reason for going to a rescue was to give a dog a chance in life and that’s what we were going to go.
We had to take one issue at a time and work on that once she had started to form a closer bond with us.

Over the years we have helped her build her confidence but had a number of setbacks along the way finding out she had multiple allergies which then caused her pain which increased the aggression and then more recently her joints have become worse and she now needs daily medication for that also. She’s become my best friend and although still not brilliant around people and animals she doesn’t know, she does now live with two of my other dogs happily and is even learning how to play at the older age of around 10 years. Only a week ago she learnt how to swim too, so it goes to show that with love, patience and understanding a Rescue dog that has been through so much in life can learn to enjoy life and be a dog again. 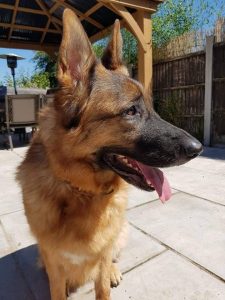 Show your support for Missy