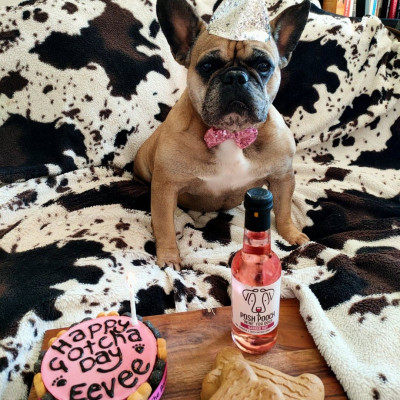 Our little Eevee was brought over from Hungary by a fabulous charity after being bred and used for breeding. She was kept in terrible conditions, fed poorly, and cut open to have her puppies taken away and sold for ludicrous amounts of money. When she came to us, she suffered numerous water infections and was in constant pain. Our vet spayed her and could not believe it when he pulled out a seed pod from her vagina. It was clear that this was part of the abuse she had been through and someone had taken it upon themselves to deliberately put it inside her.

We have had Eevee just over a year now and she is a totally different dog. She experienced her first walks, her own space, proper food and has gone from sleeping by the back door mat and being wary of people and her own shadow, to living life on the couch and wanting to be everyone’s friend.

Show your support for Eevee