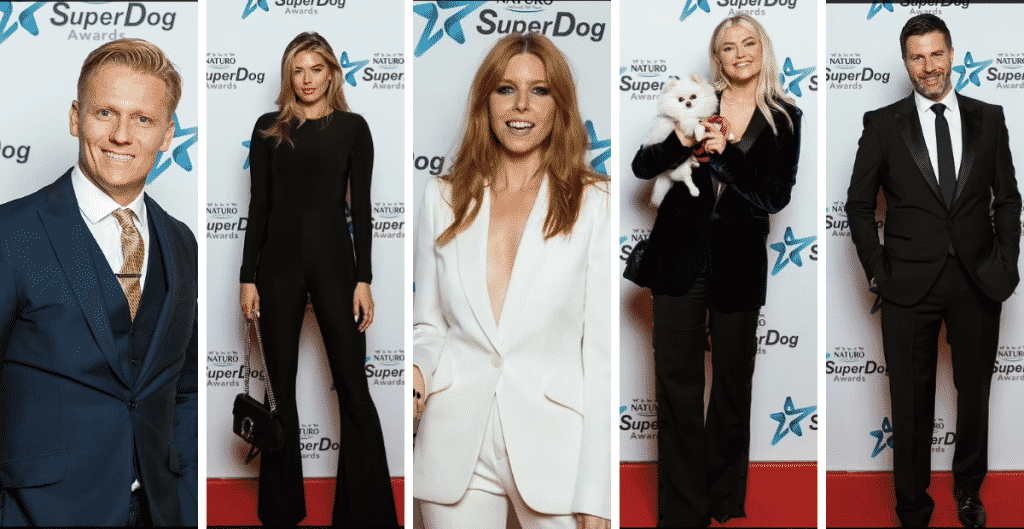 We’ve been counting down to the 9th of November and finally, the long wait is over!  Last night, TV favourite, Stacey Dooley MBE, hosted the 2021 Naturo SuperDog Awards.  These prestigious awards honour and celebrate the dogs who have shown exceptional strength, loyalty, bravery and empathy in the most challenging of circumstances. They also honour the humans who dedicate their lives to making life better for our furry best friends.

So, without further ado, here are the winners for the 2021 Naturo SuperDog Awards …

Henry The Hedgehog Dog was awarded the best worker dog for being totally brilliant at sniffing out hedgehogs.  He is even better at finding hibernating hedgehogs than the technology designed for the job and he has pioneered a completely new way of mapping their whereabouts. Louise Wilson looked proud as punch to receive the award presented by the dashing Dr Scott Miller.

Show your support for Henry

With all the celebrity presenters dressed to the nines, the four-legged celebs also brought some seriously cool style. The indomitable Scooter stole the show, looking ever so dapper in his tux with his trademark blue hair when he accepted the award for Best Carer. Scooter has supported countless people through their darkest times including his owner. He’s been a therapy dog in hospitals, police stations and prisons and is best known as a surf therapy dog.  He’s also on his way to becoming a full-time PTSD Assistance Dog to better support his adoring mum, Kirstie.

Show your support for Scooter

When the charming Anthea Taylor announced his name, Jordan Shelley was as surprised as he was delighted. A director of The Foal Group and founder of #FlopNotCrop campaign, Jordan is a most deserving winner. He has led the charge to stop the rising number of dogs who have suffered the cruel and unnecessary practice of having their ears mutilated. The impact of his work has been far-reaching and, having gathered over 100,000 signatures for his petition to close the last legal route of entry for cropped dogs to the UK market, the issue was brought to parliament and the importing of dogs that have had their ears cropped abroad is now banned. Read more about how Jordan Shelley Makes Life Better For Dogs

Show your support for Jordan

Born in Spain, Mila Moo was just a pup when she sustained a devastating blow to her head from a hunter who no longer needed her at the end of the season. She was rescued, made a remarkable recovery and then came to the UK where she was adopted by her devoted mum, Fay.  Mila now lives a full and active life and already has a string of accomplishments to her name. Her quirky personality and funny antics have earned her friends and fans far and wide, not least of all the lovely Karen Hauer who was on hand to present the SupeDog Survivor Award.

Show your support for Mila Moo

This plucky little Cavachon helped her owner, Sue, through some dark and difficult times, including losing two beloved family members to cancer.  Cassie went on to astound Sue by helping her realise that she had a lump in her breast by repeatedly nudging the area.  Early detection meant that treatment for cancer was effective and Sue was able to recover.  Cassie is a one-in-a-million companion who has brought comfort and joy to her family and all who know her.

Show your support for Cassie

The SuperDog Team Award goes to Pen Farthing and Nowzad!

When Pen Farthing, a former marine and founder of the Nowzad Animal charity in Afghanistan brought his team up to the stage to accept their award, there wasn’t a dry eye in the house. Their nail-biting escape from the Taliban after the fall of Kabul is a remarkable story and a true testament to their teamwork, courage and commitment to the wellbeing and safety of the people and animals of Nowzad. Read the full story of their Great Escape from Afghanistan and the full story behind Operation Ark

Show your support for Pen and Team Nowzad

The SuperDog Award goes to Lucy!

And last, but most certainly not least, the final award of the night went to the courageous little Lucy, our 2021 SuperDog.  Although Lucy crossed the rainbow bridge in 2016, her story drove the campaign that brought about Lucy’s Law which was passed in Parliament early last year.  She endured horrendous suffering at the hands of puppy farmers until she was rescued by Lisa who did all she could to ensure Lucy had the very best quality of life. Lucy blazed a trail of hope, bringing about a groundbreaking law that bans the sale of puppies in shops. Thanks to Lucy’s Law all puppies must be purchased from a registered breeder or a legitimate rescue centre. What an incredible legacy Lucy has left! She has saved thousands upon thousands of dogs from suffering what she went through. Well done Lucy!

Show your support for Lucy

Huge congratulations to the 2021 winners. And to our finalists, nominees and all the incredible dogs who enrich our lives in ordinary and extraordinary ways,  thank you. In our eyes, you are all SuperDogs!